ČEZ Group resolves to improve its energy efficiency and reduce CO2 emissions per MWh generated in the Czech Republic by 46% before 2020 as compared to 2001. ČEZ thus joins other energy companies that declared their specific goals in the context of the Paris climate conference. ČEZ is actively negotiating in Paris for effective carbon pricing and interconnection of CO2 trading, and is one of about 100 international companies and other organizations that have already supported “business proposals.”

“It is crucial for Europe to reach a global agreement on the reduction of greenhouse gas emissions so that the old continent is not fighting alone. Otherwise it would be highly problematic for Europe to stand up to global competition because its costly measures to reduce emissions would make its production more expensive than that of the rest of the world,” says Daniel Beneš, CEO for ČEZ. 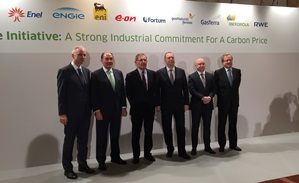 One of the key elements of the climate agreement is the involvement of all major emitters worldwide, not only from the energy sector but also from industry as a whole since industry will bear a large share of the cost of fighting climate change. The agreement should send the private sector a clear signal to direct its money into low-carbon investments.

“Joint meetings between politicians and business representatives showed that the greatest challenge to decarbonization of the global economy is not businesses’ unwillingness to reduce their greenhouse gas emissions; rather, it is often bad choice or non-existence of appropriate technologies and tools as well as long-term instability of the regulatory environment,” explains Beneš.

Carbon pricing is crucial in this context, as it will stimulate not only businesses but also the public sector and households to reduce their emissions. This is a method that is technology-neutral and market-based. Conversely, directive decisions lead to increased expenses in reaching the goal and negative effects on the entire economy.

“ČEZ’s long-term strategy is to achieve carbon-neutral electricity generation by 2050. We have proclaimed this ambitious goal, which exceeds what the EU and most world countries have pledged, together with other major energy companies in Europe,” adds Daniel Beneš, CEO, commenting on the company’s goal. ČEZ has invested over EUR 5 billion in low-carbon technologies during the last decade, and has managed to reduce its emission intensity by 30%.

THE MAGRITTE INITIATIVE: A STRONG INDUSTRIAL COMMITMENT FOR A CARBON MARKET