The first falcon nesting box was installed at the ČEZ Group’s power plants in cooperation with ornithologists in 2011. The motivation to install the box came from a falcon pair’s unsuccessful attempt in the previous year to nest in the cabling of the Tušimice Power Plant chimney.

Since then, ČEZ has installed dozens of falcon nesting boxes on chimneys and high-rise buildings throughout the Czech Republic. During the peregrine nesting season, work that would disturb the animals is suspended on these buildings, and the young falcons are subsequently monitored and ringed by ornithologists. 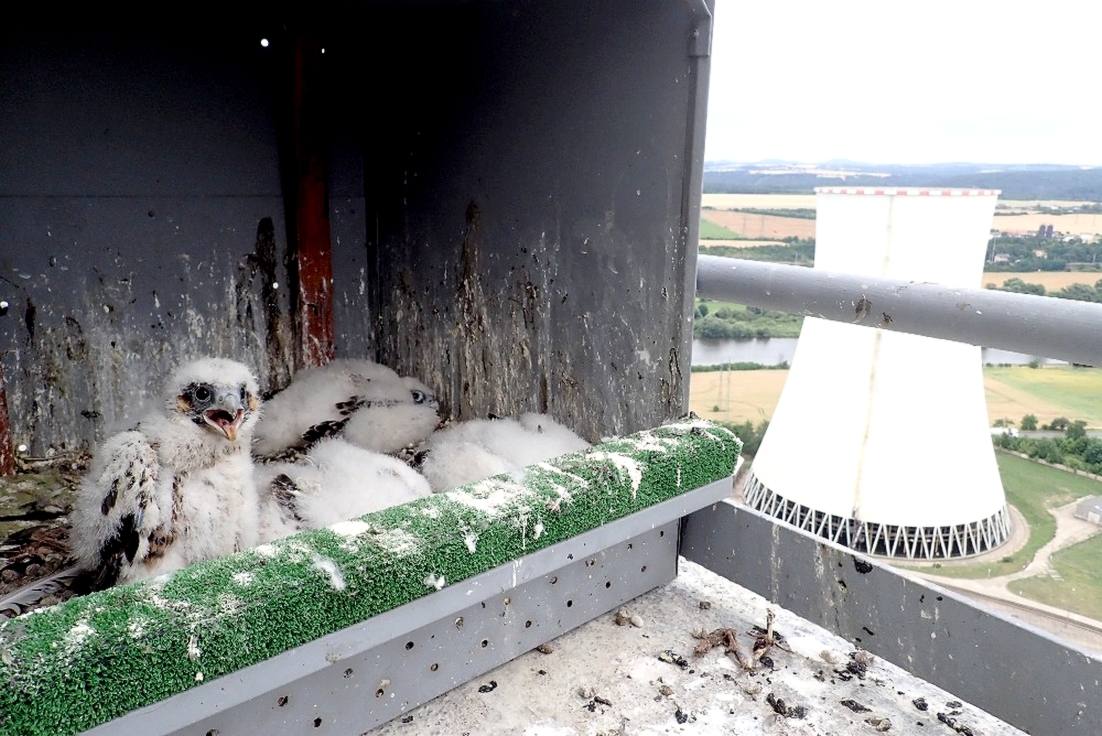 By the end of 2019, falcons at ČEZ buildings had hatched at least 84 chicks. Nineteen of these were in 2019 alone. This is a record and proof that the falcon population is gradually becoming accustomed to ČEZ’s power plants and is continuing to grow.

The very first falcon nesting box of any industrial building in the Czech Republic was installed at ČEZ’s Tušimice Power Plant in 2011. Despite some years of unsuccessful nesting in 2011–2019 (according to ornithologists, the eggs were either infertile or abandoned), 16 falcon chicks have already successfully left the nest at the Tušimice cooling tower. A peregrine falcon had been observed over the site of the power plant as far back as 2006, but it only attempted to nest, unfortunately unsuccessfully, in the chimney gallery cabling at a height of 280 meters in 2010. Because the chimney was scheduled for demolition, two nesting boxes for falcons were installed on the cooling tower instead.

An aluminium falcon nesting box filled with expanded clay was installed on the chimney gallery of the Ledvice Power Plant in autumn 2015. In the following year, a pair of falcons hatched two young. In 2017, only one male was hatched, but the bird is the most well-known of all the falcons at the power plant, being the first ringed falcon chick to hatch on the chimney. Employees of the power plant named him Ledvík, which is also recorded in the “birth certificate” in his ring. Eight chicks have already been raised at the Ledvice Power Plant. Ledvík is now the father of last year’s falcon twins from the Počerady Power Plant, where, according to the ring data, he nested with a female from Bavaria.

An aluminium falcon nesting box filled with expanded clay was installed on the gallery of the Počerady Power Plant chimney in autumn 2011. From then to 2019, twelve falcon chicks successfully left the nest. So far, last year’s male has migrated away furthest, but he was unfortunately killed in France after flying into a glass barrier. His father was Ledvík, the only falcon hatched at the Ledvice Power Plant in 2017 and the first ever ringed falcon from that power plant. The second falcon nesting box installed at the Počerady Power Plant is positioned on the ladder of one of the cooling towers. However, kestrels are nesting in it. 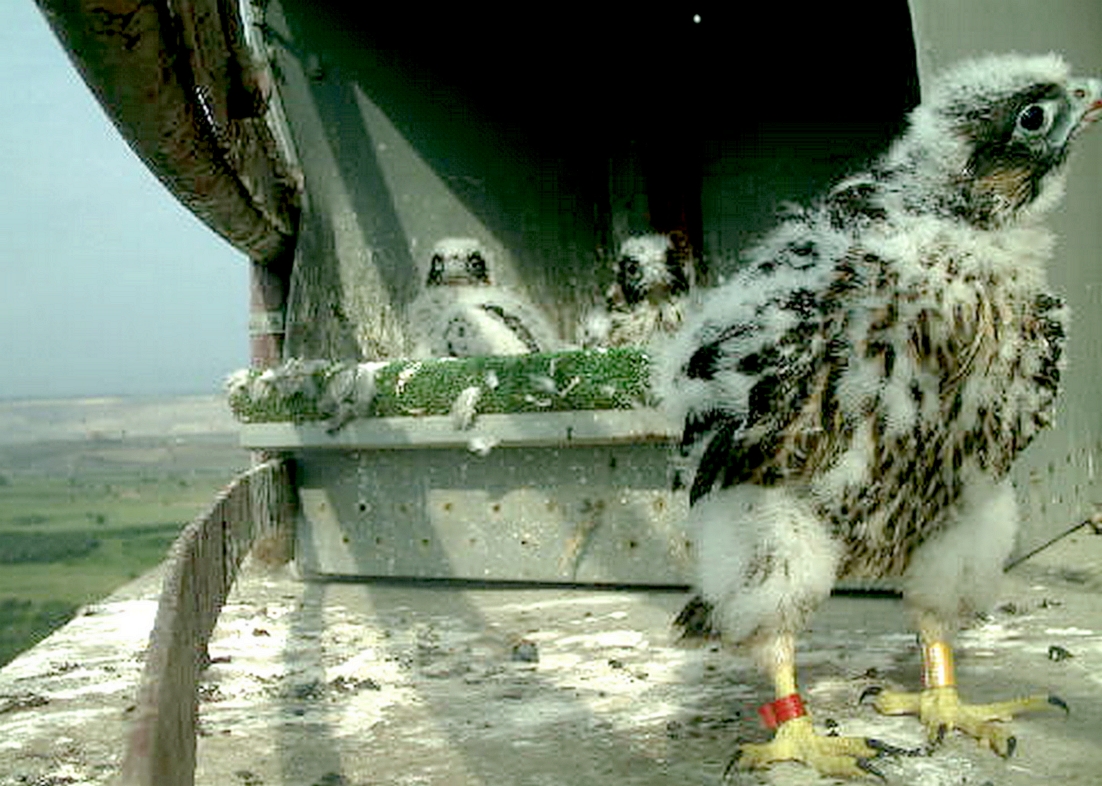 Three falcon nesting boxes are installed at the Prunéřov Power Plants on the EPR 1 chimney and the EPR2 cooling towers. However, the nests are currently occupied by kestrels. A falcon pair regularly nests on the gallery of the EPR2 chimney. The nesting boxes at EPR2 were installed in March 2012, but these have also been taken over by kestrels. A pair of falcons nested here for the first time in 2013 after the chimney’s nesting box was moved to a higher gallery. So far, they have produced seven young. Twice, a female great crested grebe (an even rarer predator than a falcon, which has been observed this far north for the first time) prevented them from nesting successfully, but after her mate joined her, they disappeared.

Two aluminium falcon nesting boxes filled with expanded clay were installed on the tallest chimney of the Mělník Power Plant in December 2015. A falcon pair has been hatching their chicks here regularly since 2016, with ten confirmed young so far. In 2018, four falcon chicks were hatched here.

An aluminium falcon nesting box filled with expanded clay was installed on the chimney gallery at the Trmice Heating Plant in September 2015. The local pair is alternately successful, but also unstable. Both the male and female are known to replace each other. However, it is difficult to estimate whether the original partners died or perished in flight. Regardless, seven chicks have successfully left the nest on the Trmice chimney. Two others were also hatched on a rock in the same area before the falcon nesting box was installed at the heating plant.

Other Power Plants and Buildings

ČEZ has also installed falcon nesting boxes at other power plants and buildings. Despite the occasional presence of falcons, no chicks have yet been hatched at these locations. This year, in 2020, a pair is nesting for the first time at the Dukovany Nuclear Power Plant, but it is not yet clear whether breeding will be successful.