The basic strategy of CEZ is to produce electric energy and heat in an environmentally friendly way. This was why in 1992 we launched the program to desulphurinize and modernize our power stations.

Modernization of our power stations

2012 - year of continuation of the comprehensive renewal of selected coal-fired power plants in the Czech Republic with the aim of operating only highly efficient sources with the lowest possible emission factors. The upgrade of Tušimice Power Station was completed in June, the construction of a new, Czech coal-fired power source in Ledvice is continuing in accordance with an updated timeline, and the retrofit of Prunéřov II Power Station got underway following a protracted approvals process. We entered into a contract on the sale of Chvaletice Power Station, bringing us closer to fulfillment of a proposed settlement with the European Commission.

Phase Two of the comprehensive renewal was completed and warranty operation is ongoing on Units 21 and 22. Currently, the process of obtaining certificates of occupancy for the various buildings is ongoing, with completion planned for June 2013. In July 2012, a fire damaged the building housing vacuum belts used to remove moisture from industrial gypsum, causing a plant-wide outage that lasted three weeks, until mobile gypsum dewatering equipment was sourced and put into operation.

All permits necessary under applicable legislation for construction of the project have been obtained.
The comprehensive renewal commenced on September 1, 2012. Currently, demolition work is nearly complete, installation of steel structures and boiler pressure vessels has begun, and foundations are being laid for the turbogenerator mounts and equipment shared by the generation units. Temporary measures are being taken to enable operation of the remaining Units 21 and 22. Decisions promulgated by regulatory authorities are being challenged in administrative court.

Installation work continued in 2012, mainly on the boiler house, the machine house, and the flue-gas desulfurization installation. 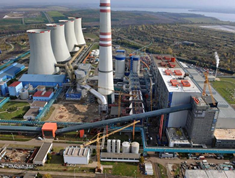 Download the slideshow for a comprehensive reconstruction of Tusimice

Over the past seven years (1992-1998), the CEZ Power Company has implemented what probably is the biggest and fastest environmental programme in Europe. Within the framework of the programme, we have installed the total of 28 desulphurisation plants and 7 fluidised-bed boilers at out power plants. Moreover, ash precipitators have been reconstructed and power plant control systems have been modernised. The overall investment in modernisation and desulphurisation of fossil power plants amounted to CZK 46 billion. Thanks to the effort, the SO2 and ash emissions have been cut by 90% and those of NOX by 50%. Our power plants are thus currently fully comparable to similar sources anywhere in Europe.

The environmental program of CEZ includes the desulphurization of the total power capacity of 5,930 MW in 32 coal-firing units, the construction of seven fluidized-bed boilers at four power stations, improvement in the efficiency of ash precipitators and the implementation of measures designed to cut the production of nitrogen oxides and carbon monoxide. The amount of 2,020 MW is scheduled to be decommissioned.

The power station desulphurization program is the fastest in North Bohemia. In 1994, the desulphurization equipment at the Pocerady Power Station(2 x 200 MW) was launched, followed in 1995 by that in Prunerov(4 x 110 MW). In these stations, the wet limestone scrubbing technique was used, which is envisaged to be deployed in 90% of coal-firing units of CEZ. At two units in the Ledvice Power Station, the combined semi-dry limestone desulphurization technique has been deployed.

In the autumn of 1995, the first fluidized-bed boiler at the Tisova Power Station was launched into operation testing. With its output of 350 tons of steam per hour, the unit became the biggest system of its type in the Czech Republic. Other fluidized-bed boilers have been constructed in the Hodonin and Ledvice power stations and in the Porici Power Station.

Currently, desulphurization units and fluidized-bed boilers are being operated at power stations giving off rated power of 4,810 MW and 442 MW respectively, which amounts to 82% of the company program. In older power stations, 1,125 MW of capacity have been decommissioned. The desulphurization program will allow the SO2 emissions from the CEZ coal-firing power stations to fall by over 90%.

Concurrent with the desulphurization efforts, reconstruction work on fly-ash precipitators and boiler modifications designed to cut the emissions of fly-ash and NOx have been under way at all coal-firing power stations of CEZ. The upgraded electric fly-ash precipitators achieve  99.8% efficiency. The emissions of ash and NOx will have dropped by over 90% and 50% respectively compared to those in 1991.

Emissions of pollutants are kept under strickt supervision and monitoring by CEZ. In all power stations, automatic continuous emissions measurements are carried out and the competent authorities are kept constantly informed.

Act No. 309/1991 Sb. sets the emissions limits for solid air pollutants (fly-ash), sulphur dioxide, nitrogen oxides (NOx) and carbon monoxide. The date by which the new limits are to be met is 31st December 1998. By that date, CEZ will have been operating no power unit failing to meet the new emission limits.

During implementation of the desulphurization process, a method of fly-ash management more friendly to the environment was adopted in all power stations. Before this technology  ash was pumped to be dumped in the sludge pools. This new advancement will allow the ash to be collected dry and reused,

for example in the landscaping projects in disused surface coal pits.

During the desulphurization process the by product, the so-called power industrial gypsum, is produced which is a valuable recycled material. Thanks to its high purity, guaranteed by the parameters of the desulphurization equipment, the material is suitable for applications in the construction industry. Since 1994, the Pocerady Power Station (a joint-venture with Knauff Pocerady) has been producing gypsum plaster boards using the power industrial gypsum produced by the desulphurization units. A similar company, this time in co-operation with Rigips, is being built near the Melnik Power Station.

Over the recent years, CEZ have studied extensively the potential of generating electricity from wind power, solar power, or by firing biological materials. The first wind power station of CEZ is power rated for 315 kW and was launched into operational testing in November 1993 in Krusne Hory (in Dlouha Louka near Osek). At this demonstration power station, tests and measurements were carried out throughout 1997, including the verification of the effect of turbulence for the power output, studying the effect of ice and atmospheric charges for the station operation, the environmental effects of the power station for its surroundings,  and the optimization of the station operation and other similar tests.

In 1997, a wind power station farm was renovated in Mravenecnik, which is located in the Jesenik mountains (near the Dlouhe Strane Pumped-Storage Hydro Power Station) which includes three wind units of respective power ratings 220, 315 and 630 kW).

TThe discharged water is subject to like control. In the control tanks and the discharge pipe, the volume activities of the activation and fission products - gamma radiation sources, Strontium ( 89 Sr, 90 Sr), and tritium are assayed and the overall alpha and beta activities are measured. All the data obtained has been found to be over ten percent below the permitted limits.

The discharged water is subject to like control. In the control tanks and the discharge pipe, the volume activities of the activation and fission products - gamma radiation sources, Strontium ( 89 Sr, 90 Sr), tritium are assayed and the overall alpha and beta activities are measured. All the data obtained have been found to be tens of per cent below the permitted limits.

The summarized information about the nuclear safety of Czech nuclear facilities is contained in the detailed report on State Office for Nuclear Safety page, which was successfully discussed with IAEA.