The impacts of the nuclear power plants in operation are continuously monitored and assessed, and no evidence of significant adverse have been found that would imply impacts on individual components of the environment. The health status of the population around both of our nuclear power plants is also evaluated. According to the results of these studies so far, there is no direct impact of the operation of a nuclear power plant on the health of the population living in its vicinity, and the frequency of disease incidence is not different from other areas.

The whole EIA process is characterized by the preparation of thousands of pages of expert studies, analyses, reports and other materials, the preparation of which involved tens of experts and specialists from the Czech Republic. Another significant characteristic of the process is the high overall time required. The whole process was monitored by the Czech and foreign public. The public involved had several possibilities to raise comments and questions on individual documents during the process.

The entire process of environmental impact assessment began on 20 July 2016, when the company Elektrarna Dukovany II, a. s. submitted a notice of project implementation to the Ministry of the Environment of the Czech Republic. The notice of project implementation is used for initiating a screening and scoping procedure, which aims to specify the information (content and scope) from the point of view of the environment, that should be included in the following Environmental Impact Assessment documentation (hereinafter referred to as the “EIA documentation”). During the screening and scoping procedure, the Ministry of the Environment of the Czech Republic received comments from the concerned authorities (e.g. State Office for Nuclear Safety, Ministry of Agriculture of the Czech Republic, regional authorities, etc.), local governments (municipalities and local authorities), the public, including foreign public etc.

The Ministry of the Environment of the Czech Republic subsequently delegated the EIA documentation to an impartial originator of the report as well as to the concerned neighbouring states and offered a preliminary hearing in accordance with Section 13(3) of Act No. 100/2001 Coll., on Environmental Impact Assessment and Article 5 of the Espoo Convention. Germany and Austria were interested in the preliminary hearing. Together Hungary and Poland was satisfied only with written consultations in the form of responses to the comments and questions raised. The actual interstate consultations with the German representatives under the leadership of the Ministry of the Environment of the Czech Republic took place on 6 April 2018 in Prague, in the Ministry building. The main content was a professional discussion and answering the questions presented by the participating experts. A similar format was followed by subsequent interstate consultations with Austria, held between 10 and 11 April 2018.

In the context of public relations, a public hearing took place on 3 May 2018 in Budapest, Hungary, based on the requirements of Hungarian legislation. However, so-called public discussions (not hearings within the meaning of the law) also took place in Austria (Vienna, 6 June 2018) and Germany (Munich, 13 June 2018). Of course, there was the public hearing in the Czech Republic, organized by the Ministry of the Environment of the Czech Republic on 19 June 2018 in Třebíč, where anyone had the opportunity to put forward their questions and comments regarding the environmental impact assessment of the new nuclear power plant at the Dukovany Site.

On 30 August 2019, the Ministry of the Environment of the Czech Republic, on the basis of EIA documentation, observations submitted on EIA documentation, public hearing and the report, issued a favourable binding statement on the environmental impact assessment of project implementation (hereinafter referred to as the “Statement”). At the same time, the Statement was sent to the notifier, concerned authorities and local governments and published it together with the report. The issued Statement includes a number of conditions for limiting or eliminating the impacts of the project on the environment and public health, which must be observed in the phases of preparation, construction and operation of the project implementation, as well as, in the subsequent monitoring and analysis of the environmental impacts of the project implementation . The Statement is valid for 7 years from the date of issue. At the request of the notifier, the competent authority shall extend the validity of the Statement for a period of 5 years, even repeatedly, unless there have been changes in the conditions in the territory concerned or findings and assessment methods as a result of which the project implementation could have significant environmental impacts not yet assessed.

The Statement serves as a necessary basis for issuing decisions in related proceedings (Site Permit and Building Permit) and must be valid at the time of the issue of these permits at first instance.

The EIA documentation itself contains about 500 pages of text and 2000 pages of annexes. Approximately 200 experts from several reputable institutions were involved in its preparation that lasted 15 months, such as:

In the EIA documentation, the experts assess the impacts on individual components of the environment and public health. The subject of the assessment are impacts on the population, air and climate, water, noise situation, and other physical and biological characteristics, soil, rock environment and natural resources, landscape, flora, fauna and ecosystems, tangible assets and cultural monuments, transport and other infrastructure, and other monitored parameters. The impacts of new units are assessed separately and together with the operation of the existing two units. It also assesses the impacts that occur during construction and at the end of operation of the units.

During the preparation of the EIA documentation, no facts have been found that would prevent further preparation of new units in terms of environmental impact. Possible impacts on public health and the environment, even considering the synergistic effect of the operation of the existing power plant, do not exceed the applicable legal limits or (if no limits are set) acceptable levels. 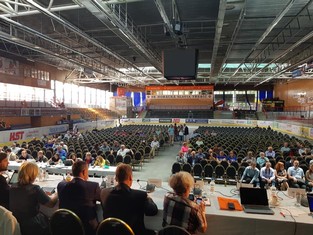