CEZ's Consolidated Quarterly Report on Operational, Economic and Financial Results for 1st Half 2001, in accordance with IAS

Other expenses doubled to CZK 1.0 bn in comparison with the same period of 2000.

Earnings per share increased from 8.4 CZK to 11.6 CZK due to an increase in profit.

The net return on equity (for the last 12 months) increased from 6.8% to 7.0% as a result of a slight increase in the average capitalization in comparison with that of profit.

Assets turnover (for the last 12 months) stayed at the same level.

Revenues from sales of electricity (CZK 27.7 bn) increased by CZK 2.7 bn (by 10.6%). This is because of a change in methodology, where auxiliary services are now paid by REAS to ČEPS for all electricity delivered by REAS to final consumers, not only for electricity sold by ČEZ to REAS (as in 2000). The sale of electricity to regional distribution companies was 19 002 GWh, an increase of 400 GWh (by 2.1%).

electricity from inland and abroad) slightly decreased by 0.1% to 64.3%.

In the first six months of 2001 CZK 2.4 bn was spent on the NPP Temelín. Initiation of the 1 st unit continued and power levels up to 55% of the nominal load were attained before breakdown due to the turbo-generator’s vibrations. Repairs should be finished in early August when initiation will be resumed. Commissioning of the 1 st unit is expected to happen n December 2001. The work on the 2nd unit continued according to the approved schedule, hot tests are expected in the second part of August and the predicted term of fuel loading is the end of this year.

During the first six months of 2001 ČEZ fulfilled all its financial commitments.

The favourable trend which started in the second half of 2000, when operating activities brought in a higher amount of cash than was spent on investment continues. These facts allowed a sum of CZK 2.8 bn to be used for payments on borrowings.

The annual general meeting of shareholders, which took place in June, among other things,

The Natio nal Property Fund of the Czech Republic signed an agreement in June with the company WEIL, GOTSHAL & MANGES as the solicitors for completing the privatization ČEZ and six regional distribution companies.

The Czech government decided in July that assistance to the National Property Fund of the Czech Republic will be provided by Deloitte & Touche.

At the request of E. ON, termination of the ČEZ - E. ON contract is being negotiated. Electricity deliveries from ČEZ have been interrupted since the 1 st of July. As the demand for electricity in the Czech Republic is rising and other exporting possibilities exist, ČEZ does not expect a reduction in the power plants’ production due to the termination of this contract 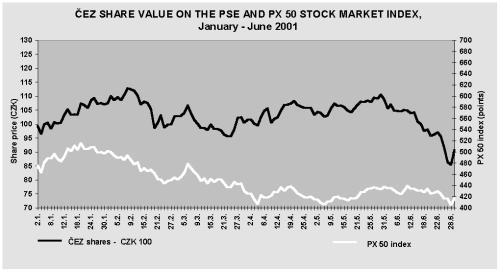