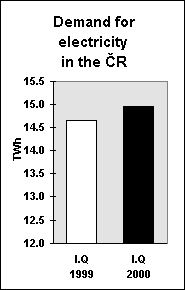 Net income for the period January to March amounted to Kč 3.8 bln, an increase of Kč 3.1 bln (434%) in comparison with the same period of the previous year. This improvement results mainly from fluctuating exchange rate of Kč, as well as from changes in foreign currency portion of the debt.

Total revenues of ČEZ during the first three months amounted to Kč 14.8 bln and were Kč 0.4 bln (2.8%) lower than in the same period of previous year.

Other income amounted to Kč 0.4 bln, in contrary to other expenses Kč 2.9 bln in previous year, i. e. interannual improvement by Kč 3.3 bln. This results, as mentioned, from exchange rate changes, as well as from changes in foreign currency portion of the debt.

Income tax amounted to Kč 1 bln, and remained at the same level as in 1999. 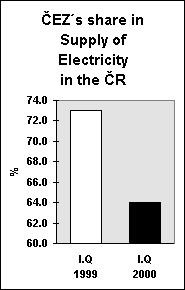 Return on equity ntto rose - as a result of higher increase of profit in comparison with the increase of average capitalization - from 6.1% to 7.3%.

In comparison with the same period of 1999, electricity sales decreased by Kč 1.6 bln 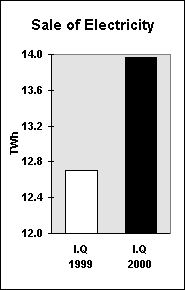 (10.9%), but when auxiliary services (invoiced separately from February 2000 to ČEPS, included into “Heat sales and other revenues?) are transferred into electricity sales, the decrease is much lower, only Kč 0.6 bln (4.1%).

ČEZ´s share in meeting demand for electricity in the Czech Republic decreased from 72.8% to 64.1% as a result of higher production of independent producers (by 1,305 GWh, i. e. 26.4%), and higher import by traders (by 95 GWh, i. e. 28.6%). The finished contract for electricity purchase from Elektrárny Opatovice contributed to this lowered ČEZ portion on the market, too. The total sales of ČEZ in the Czech Republic decreased by 1,140 GWh (9.6%). On the contrary, ČEZ increased electricity export by 2,246 GWh (263%).

The construction of NPP Temelin continues according to the approved time schedule, the total amount spent during the first quarter was Kč 1.7 bln. The International Atomic Energy Agency (IAEA) mission inspected this power plant in February and stated good level of preparedness for its commissioning. At the beginning of April hot function tests of 1st unit, which controlled all appliances at the level of the normal operational parameters (but without nuclear fuel loaded) were finished successfully.

During period January - March 2000 ČEZ well and in time fulfilled all its financial commitments. 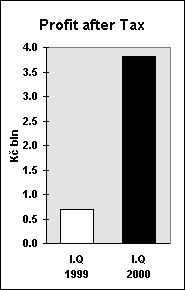 In January joint company JVCD (with Vivendi - Dalkia) was established. This joint venture company will be engaged in electricity and heat business in North Moravia region.

The extraordinary general meeting (in January 2000) confirmed con-clusions of both 1999 general meetings and newly negotiated coal purchases and sponsor program for 2000.

This report has not been audited.