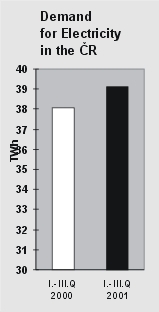 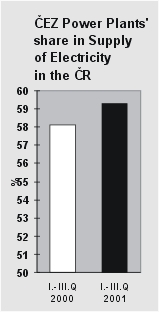 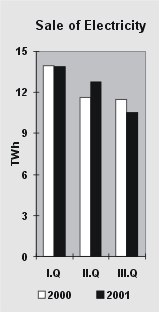 Revenues from sales of electricity (CZK 38.9 bn) increased by CZK 3.1 bn (8.8%) thanks to a change in payment methods for auxiliary services. REAS now pay ČEPS for all electricity delivered by them to the final consumers and not, as was the case in 2000, just for electricity sold by ČEZ to REAS. The sale of electricity to regional distribution companies was 27,022 GWh, an increase of 252 GWh (by 0.9%). Exports of electricity 9.4 TWh were up by 176 GWh (1.9%).

In the first nine months of 2001 CZK 3.6 bn was spent on the NPP Temelín. The repair of 1st unit’s turbogenerator was finished and, after synchronising it with the transmission grid on 15th August, tests continued at power levels up to 55%. After the Nuclear Safety Authority gave permission, tests at power levels up to 75% started in the second half of October.

The leakage tests of the 2nd unit were completed and, after the Nuclear Safety Authority gave permission, hot tests began. 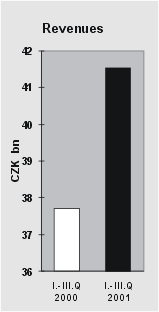 xxxxxxxxxxxxxxxxxxDuring the first nine months of 2001 ČEZ fulfilled all its financial commitments.

Net cash provided by operating activities increased to CZK 15.1 bn (a rise of CZK 1.1 bn) thanks to higher profit and lower interest payments.

The favorable trend which started in the second half of 2000, when ope rating activities brought in a higher amount of cash than was spent on investment, continues. A sum of CZK 3.5 bn was used to reduce borrowings despite CZK 1.2 bn being given to shareholders in dividends issued by Česká spořitelna.

The completion of the privatization of ČEZ and six distribution companies continues. The steering committee short listed 4 from 12 potential investors: Belgian Electrabel, French Electricité de France and two consortiums: Italian Enel/Spanish Iberdrola and American NRG Energy/British International Power. The three companies/consortiums, except for Electrabel, began due diligence of ČEZ in October by studying information in the data room, meeting selected managers and visiting the power plants. At the end of October ČEZ management presentations were given to these potential investors. 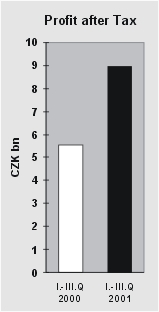 The electricity market in the Czech Republic will open up in 2002 and ČEZ has gone to the market with a new marketing strategy and has offered "rainbow electricity" to its customers (each type of electricity is characterised by own colour and price). At first we offer specific amounts of electricity to distribution companies and then the remaining volumes by auctions. The first offer for the cheapest "yellow electricity", which will be supplied by nuclear power/coal basin power plants was accepted by all distributors, with one exception - Severomoravská energetika. The second offer of another three colours (green, red and blue) was accepted by all distributors. ČEZ guarantees, that the average price (for all colours) in 2002 of electricity offered in the Czech market will be lower than in 2001. The goal of this price strategy is to maintain and strengthen our position in the market when it will be fully opened up for all producers from the beginning of next year. 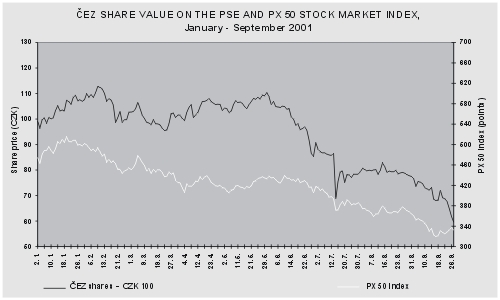