CEZ's Consolidated Quarterly Report on Operational, Economic and Financial Results for 2002, in accordance with IFRS

Our Income Statements, Balance Sheets, and Cash Flow Statements have been conver-ted from Czech Accounting Standards to International Financial Reporting Standards (IFRS) and may differ significantly from the same data prepared according to Czech Accounting Standards. The structure of data was changed due to changes in consolida-tion and 2001 data were adjusted to allow for year-to-year comparison. The figures presented include the fully consolidated data from ČEZ and ČEPS, and a portion of the earnings of an affiliated company (Severočeské doly) using the equity method (ČEZ share 37.21%).

Net income for 2002 amounted to CZK 8.4 bn, a decrease of CZK 0.7 bn (7.7%) in comparison with the previous year. While EBIT was lower by CZK 3.4 bn, EBT decreased by CZK 1.5 bn. ČEZ’s turnover was CZK 55.6 bn in total, only CZK 0.5 bn lower than in 2001 mainly due to lower electricity prices on the liberalized wholesale market. Operating expenses increased by CZK 2.9 bn (7.1%), mainly due to an increase in depreciation and amortization by CZK 2.4 bn as Unit One of Temelín Nuclear Power Station was put into commercial operation. The cost of purchased power and related services was up by CZK 0.9 bn and repairs and maintenance costs increased by CZK 0.4 bn. On the other hand, fuel costs decreased by CZK 0.3 bn (despite an increase in total production) due to a portion of coal plant generation being moved to Unit One of Temelín. Other expenses/income amounted to CZK 0.5 bn on the income side, an improvement of CZK 1.9 bn over the expense of CZK 1.4 bn reported in 2001. This result was due to changes in CZK exchange rates. Income tax (CZK 3.4 bn) declined by CZK 0.8 bn. The decrease was mainly due to investment tax relief related to the start-up of Temelín (CZK 1.2 bn). On the other hand, the deferred tax expense increased by CZK 0.6 bn to reflect the planned sale of ČEPS in 2003. Earnings per share went down from CZK 15.5 to CZK 14.3 due to a decrease in profits. The price/earnings ratio increased from 5.0 to 6.5 due to a rise in share prices by 19.3% and a decrease in net profit by 7.7%. The net return on equity decreased from 6.9% to 6.0% due to lower profits and growing equity. The net return on total assets decreased (from 4.0% to 3.7%) as a result of lower profits and an increase in the average value of total assets (by 2.0%). Assets turnover decreased slightly to 0.24. Total indebtedness (provisions excluded) decreased to 26.7% (from 29.8%); long-term indebtedness also fell to 15.4% (from 18.8%).

The number of employees to installed capacity ratio decreased during 2002 to 0.650 (by 12.6%) due to an increase in installed capacity (by 1,000 MW) and a reduction of employees by 302. ČEZ´s aim is to reduce this indicator to 0.53 during the next two years, which would place ČEZ among the top Europeanelectric utilities using comparable generation technologies.

ČEZ sold the highest quantity of electricity in its history in 2002. Total amount of electricity sold, at 52,253 GWh, rose year-on-year by 1,410 GWh (2.8%). In monetary terms, electricity sales CZK 52.9 bn were lower due to revision of our Rainbow Power prices to maintain competitive advantage.

Demand for electricity in the CzechRepublic, amounting to 53.7 TWh, was down by 105 GWh (0.2%) compared to year 2001. If the temperatures in both years had been in line with the long-term average, electricity demand would have grown by 0.4%. Industrial consumption (wholesale and ?other’ and electricity generated and consumed in industrial facilities, excl. consumption in pump storage power stations) decreased overall by 106 GWh (0.3%). Small customer consumption remained at the same overall level as in 2001, with small business consumption up by 118 GWh (1.6%) and household consumption down by 117 GWh (0.8%), the main reason being lower demand for heating (year-to-year higher average temperature by 0.8°C).

A slight reduction in domestic electricity sales was compensated by higher export (by 3,886 GWh). ČEZ power plants met 56.6% of the demand for electricity in the CzechRepublic compared to 58.9% in 2001.

Unit One of Temelín Nuclear Power Station has been successfully put into operation. It generated a total of 5.4 TWh of electricity in 2002, 3.7 TWh of which was generated during its commercial operation (since June 11, 2002). A planned outage for changing nuclear fuel has been underway since the beginning of February 2003.

The new ČEZ Group was formed on 1 April 2003. The transfer of the shares of REAS to ČEZ was realized on that day (thus making ČEZ the majority shareholder in five and minority in three of the regional distribution companies) and, simultaneously, a 66% share in ČEPS was transferred to acquirers controlled by the State (OSINEK, Ministry of Social Affairs).

The deal was completed after the Chairman of the Antitrust Office issued a decision on ČEZ’s appeal, in which he confirmed his initial decision on the deal structure (i.e. sale of minority stakes in ČEPS and in three REAS and the sale of one of the acquired majority stakes) but mitigated certain accompanying conditions.

An extraordinary General Meeting took place on 24 February 2003, where the sale of a heating power station in Náchod (north-east Bohemia) was approved, five members of the Supervisory Board were changed, and a revision to the terms of an acquisition of treasury shares was approved. The flood in August 2002 caused CZK 600 m in damages to ČEZ´s property (all numbers in this paragraph according to Czech accounting standards). The hydro power plants Orlík and Štěchovice are still out of order. The expected insured benefit amounts to CZK 500 m. Total losses caused by the floodwith an influence on pre-taxincome come to CZK 300 m. 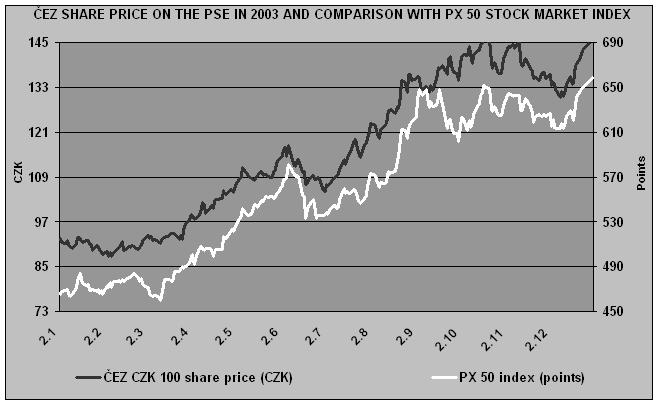