CEZ Group has acquired another 35 wind turbines with a total installed capacity of 85.25 MW in the German market. Its eight wind parks are dispersed over northern Germany and all of them have already been commissioned. Operating support is obtained under the contract with wpd windmanager, a sister-company of the reputable seller, wpd AG. The wind farms benefit from the 20-year feed-in tariff. 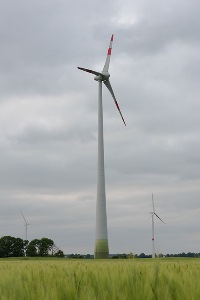 “This is our first really big acquisition in the German renewables market. Our wind farms in Germany generate more than 210 GWh of electricity per year, covering the consumption of almost 100,000 households. We are still interested in not only completed onshore projects but also offshore projects and projects under development,” says Tomáš Pleskač, Chief Renewables and Development Officer.

The latest acquisition concerns three companies, subsidiaries of the reputable group wpd AG, Germany’s leading wind park developer and operator, and involves 35 wind turbines with a total installed capacity of 85.25 MW. The wind farms are located at eight sites in the states of Mecklenburg-West Pomerania, Brandenburg, Saxony-Anhalt, Saxony, and Hesse. All of the wind turbines have currently been commissioned. Operating support is obtained under the contract with wpd windmanager. The wind farms benefit from the 20-year feed-in tariff. With its latest acquisition, ČEZ has expanded its presence in the German renewables market to almost 100 MW.

CEZ Group’s first acquisition in the German market was the Fohren-Linden wind park in the state of Rhineland-Palatinate in early December. ČEZ acquired the 12.8MW wind park from AREAM, a German investment company.

CEZ Group became an active member of Germany’s four most important wind associations this year. One of its goals is to leverage synergies with other companies, as CEZ Group has already made three investments in new decentralized energy in Germany through its investment fund, INVEN CAPITAL.

In addition to the German market, ČEZ monitors suitable opportunities in renewable energy sources in other European countries with the aim of building a stable portfolio of assets at different stages of their life cycle and providing related services.