Back
CEZ Group Media Press releases ČEZ Presents Clean Energy of Tomorrow: Its Production Portfolio Is To Be Rebuilt to Low Emissions by 2030

ČEZ has intensified its transition to future emission-free energy. This is in line with its strategy that primarily aims at transforming its production portfolio to low emissions by 2030, becoming carbon neutral by 2050, and offering the best energy solutions and customs experience in the market. Vision 2030, referred to as the Clean Energy of Tomorrow, confirms CEZ Group’s ambition to be a leader in sustainable development in the Czech Republic as well as in the entire Central Europe. 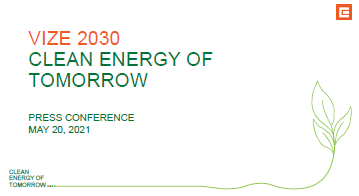 In its accelerated VISION 2030 strategy, CEZ Group commits to fulfilling its specific environmental, social and corporate governance targets by 2025 and 2030. “It is our obligation toward our customers, employees and society as a whole to reduce the amount of power generated from coal and substitute it with production from clean sources. Therefore, we are going to increase the capacity of emission-free sources to 6,000 MW by 2030,” says Daniel Beneš, CEZ Group’s Chief Executive Officer and Chairman of the Board of Directors. “It is a global priority to try and prevent climate change and, thereby, the social and political pressure on the energy sector has been growing. Decarbonization goals have not only become stricter in Europe, but also in other parts of the world. That is also why we have accelerated our strategy and continue to adapt our corporate governance to a rapidly changing environment in order to continue creating long-term sustainable values that are key for the entire society,” Daniel Beneš explains. This also relates to the company’s approach to its social responsibility policy in accordance with the current demands for its ESG performance, which is today evaluated by numerous rating agencies not just within the energy sector.

By 2030, CEZ Group is going to reduce its emissions by 55% compared to 2019. In 2025, ČEZ plans to only generate 25% of its total generated power from coal, and only 12.5% in 2030. At the same time, the company will focus on building new capacities of renewable sources (RES), specifically 1.5 GW of RES installed capacity by 2025 and a total of 6 GW in RES by 2030. Nuclear power plants will remain a part of the carbon neutral and stable portfolio. The company is going to enhance their efficiency and, thus, improve the energy security and self-sufficiency of the Czech Republic. For this reason, the plan also retains the construction of a new nuclear unit in Dukovany.

Emission reduction will be supported by a continued development of the currently most extensive electromobile charging network in the country. By 2025, ČEZ will operate at least 800 public charging stations. “We also expect to invest significantly in smart grids and products that will allow households to save energy and reduce emissions,” added Pavel Cyrani, Vice-Chairman of the Board of Directors and Sales and Strategy Division Director.

VISION 2030 also emphasizes digitalization and employee care in view of the changing qualification requirements and structure of production sources and services provided by CEZ Group. “We are going to support employee requalification and transition of regions from coal-based energy to new technologies. Employee loyalty and satisfaction as well as customer satisfaction are key for us. We want to be a leader in energy services and clean decentralized power generation and heating. All key customer care processes will gradually become available online by 2025,” added Pavel Cyrani, Vice-Chairman of the Board of Directors of CEZ Group.

CEZ Group has significantly reduced its power generation from coal during the 1990s when it shut down nearly 2,000 MW of coal power plant capacity, which represented a total of 19 obsolete coal units. Presently, the group has been purposefully reducing power generation from coal since 2016. Over the past year and a half, coal units with a total capacity of some 1,000 MW were shut down. On the other hand, ČEZ’s portfolio of renewable sources accounts for 1,700 MW of the installed capacity of RES, of which 1,000 MW is in the Czech Republic (800 W hydro, 125 MW FVE, 118 biomass, 8 MW wind).

At the same time, ČEZ is the leading player in modern ESCO energy services in the region, developing its presence in the Czech Republic, Slovakia, Germany, Italy, Poland, and Romania. By means of its subsidiary INVEN Capital, ČEZ has been developing modern energy technologies across Europe and on a global scale as well.