Back
CEZ Group Media Press releases Operations launched at Europe’s first new LNG terminal since the start of the war in Ukraine, and the Czech Republic is involved. The Dutch terminal will cover up to a third of the Czech Republic’s gas consumption

The first floating LNG terminal was put into operation today at Eemshaven, the Netherlands, in the presence of representatives of the Czech and Dutch governments and ČEZ. It is the first facility of its kind launched in Europe since the start of the war in Ukraine. The LNG terminal was built and commissioned in just a few months. The facility will be able to process as many as eight billion cubic metres of gas per year. Of that, three billion are earmarked for the Czech Republic – a volume equal to approximately one-third of the country’s annual consumption. The Ministry of Industry and Trade, in cooperation with ČEZ Group, had secured in advance both the lease of a portion of the new terminal’s capacity as well as the routes for transporting the gas to the Czech Republic. At this point, the first cargo of gas is on its way from the United States. The rest of the capacity of the terminal operated by the Dutch company Gasunie will be used by Shell and Engie.

“A very important step is being taking here, in the Netherlands.  We are witnessing the opening of the first LNG terminal in which the Czech Republic has purchased capacity.  The capacity is such that it covers approximately a third of the Czech Republic’s annual gas consumption.  We have entered into a long-term contract – for five years.  I think that this is a good example, not only of the action-readiness of the Czech government and ČEZ, through which we have implemented this project, but above all, it is a great example of European cooperation,” said Prime Minister Petr Fiala.  “Today, our gas tanks are 84% full.  We are prepared for the upcoming winter.  The goal is to have sufficient energy in the Czech Republic for households, public institutions, and enterprises, as well as for the energy to be at affordable prices.  Several countries participate in the running of the terminal and in getting the gas to the Czech Republic: in addition to the Netherlands, also France and Germany are involved.”

“We have been negotiating about the possibility of obtaining a share in the LNG terminal in the Netherlands since April of this year.  It is another step whereby we gradually free ourselves of our energy dependency on Russia.  In this case, natural gas supplies will replace up to one-third of gas consumption.  This is a historical moment for the Czech Republic’s energy security, as we have never before had a share in an LNG terminal,” added Minister of Industry and Trade Jozef Síkela.

The facility, with an aggregate annual capacity of 8 billion cubic metres, located at the Eemshaven port in the province of Groningen, is comprised of two vessels: the Exmar S188 and the Golar Igloo, which enable storage and regasification (FSRU). Liquified gas will be delivered to the terminal in specially adapted tankers. Once heated at the terminal and converted to a gaseous state, it is injected into the transport pipeline system. Aside from ČEZ, capacity in the terminal has been reserved by other well-known energy companies: Dutch Shell and French Engie.

"It is very good news that Gasunie, together with all the parties involved at home and abroad, has been able to realise the new LNG terminal so quickly. In addition to saving as much energy as possible and filling the gas storage facilities, the import of liquid gas is indispensable for the security of gas supply in the coming winter. The arrival of the new LNG terminal is an important step not only for the Netherlands, but for the whole of Europe towards reducing its dependence on energy from Russia as quickly as possible," said Dutch Minister for Climate and Energy Rob Jetten. 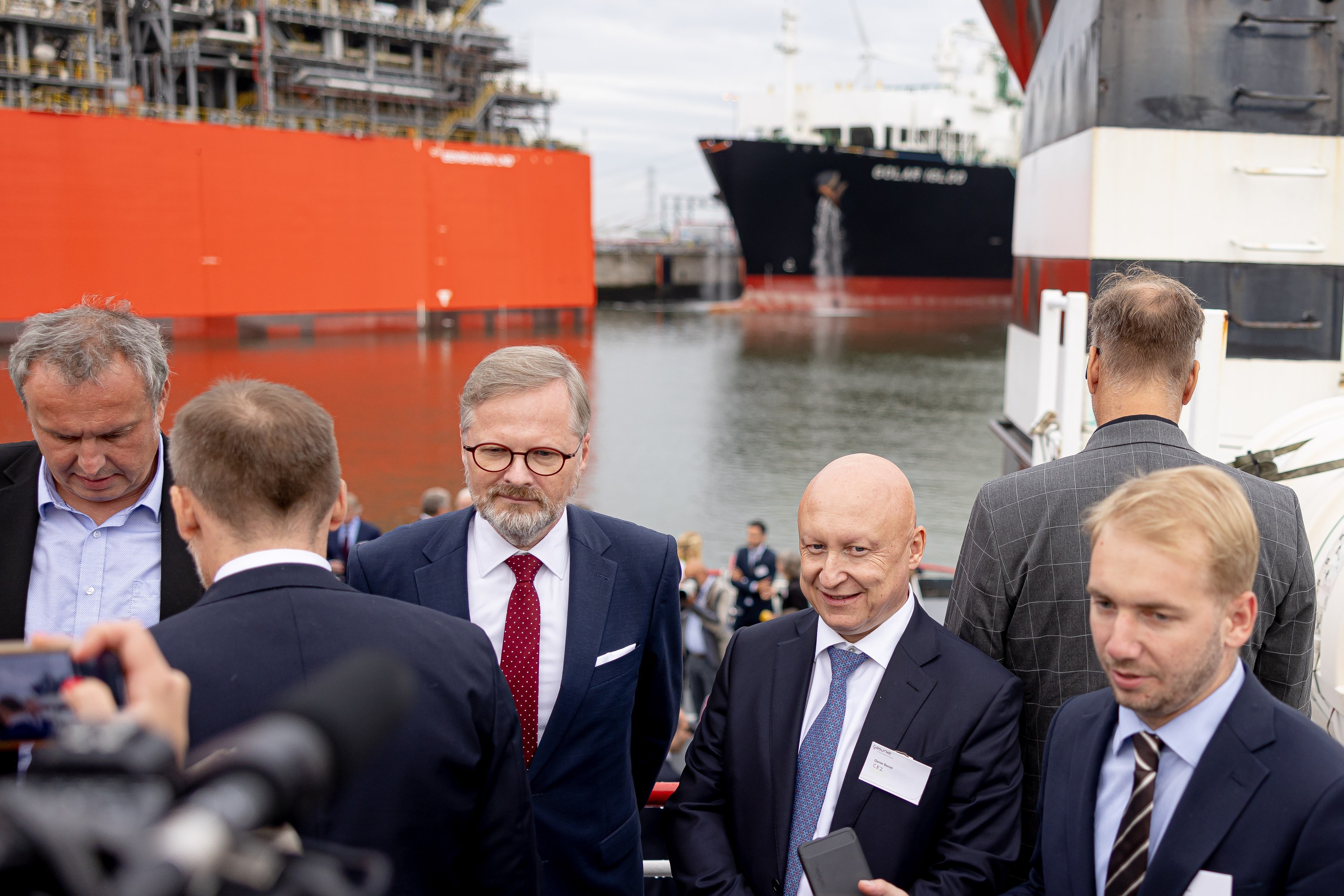 Holding capacity in the import terminal, which the Czech Republic achieved in mid June, was the first prerequisite for further negotiations for obtaining liquified natural gas. A month later, ČEZ, in cooperation with the Ministry of Industry and Trade, also met the second condition: it gained transport capacity for carrying the gas from the Netherlands to the Czech Republic. The first tanker is already on its way.

“The first LNG shipment will arrive in approximately ten days.  It will be a tanker with a capacity of 100 million cubic metres, which will come from the United States, from Cheniere. And more will follow: we have contracted for a total of eight slots for eight ships with a similar capacity by the end of the year, and we will carry on at a similar pace,” said CEO of ČEZ Daniel Beneš.

"The EemsEnergyTerminal makes an important contribution to the security of supply and helps the Netherlands and Europe to reduce their dependence on Russian gas. In the longer term Gasunie wants to use the terminal for green hydrogen. In this way, the EemsEnergyTerminal will be able to contribute to the energy supply in the Netherlands and Europe for many years to come," said CEO of Gasunie Han Fennema.

Did you know that...

CEZ Group begins withdrawal from Türkiye, signing sale of its share in AKCEZ to Torunlar Group

U. S. Steel Košice is heading towards a more sustainable future. Košice steel mills will reduce their climate footprint with the help of ČEZ and ESCO Slovakia

INVEN CAPITAL has successfully sold its stake in the Israeli start-up Driivz, increasing the value of the original investment many times over in three years