Power engineers use smart solutions to retain water in the region

The new infiltration basins at the Dukovany Nuclear Power Plant should contribute to the restoration of the ground water level in the locale in upcoming years. The power plant has completed its first, near the new parking lot. Another infiltration basin will be created during the construction of a new administrative building. In addition to retaining water in the countryside, power engineers also focus on cost savings, in particular in the form of treatment and new technologies.

It is a raw material important to the operation of the Dukovany Nuclear Power Plant, which is one of the reasons why power engineers from Dukovany have focused on water utilisation.  Even though the supply of water for the operation of the power plant as well as for the new planned block is more than sufficient in the two Dalešice Reservoirs, even in dry summer months, power engineers are investing further millions of crowns into smart technologies in order to save it and retain it in the land.

One such solution is the construction of infiltration retention basins to which rainwater is channelled.  There, it gradually absorbs, supplementing the ground water level.  This smart solution for rainwater drainage, which significantly aids in keeping a hydro-balance in the land and benefits the environment, was chosen by power engineers when building a futuristic parking place, roofed with photovoltaic panels.

“Like in the generation of emission-free power itself, in which we employ cutting-edge technologies, materials, and methods, we pay the same amount of attention to seemingly less visible areas, such as the retention of moisture in the land,” says the Director of the Dukovany Nuclear Power Plant, Roman Havlín. “The absorption of water directly at the parking lot and on adjoining green areas was not possible due to an unsuitable type of subsoil, which is why we have decided – even at the cost of higher, but from the environmental point of view smartly used, investment costs – to build an infiltration retention reservoir in a more remote location that had a more suitable subsoil,” adds Roman Havlín.

In a remote area, power engineers built a two-meter-tall underground infiltration reservoir with a total area of 200 m2, made of 280 honeycomb blocks.  Water from an area of 1.95 ha is channelled to the reservoir – the new parking lot with a photovoltaic roof and a part of the existing parking lot that had not featured an absorption system.  With a view to the scope and nature of the drained areas used for car parking, the drainage system is fitted with an oil-substance separator with a capacity of 350l/s.  The infiltration reservoir is fully functional and prepared for its first rain.  The new parking lot could be tested by drivers in April, together with the first supply of emissions-free power from the photovoltaic panels on its roof. 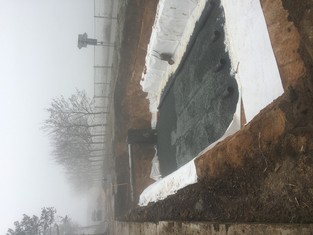 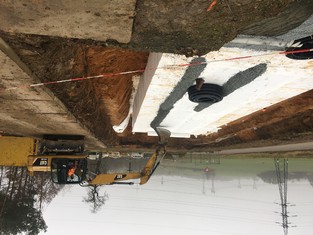 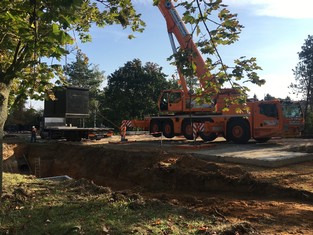 A major milestone of the new power plant at Dukovany