Fast recharging of electric cars at ČEZ stations will henceforth be possible at selected Shell service stations in the Czech Republic. ČEZ Group, the operator of the country’s most extensive network, with more than 200 charging stations, together with Shell Czech Republic a.s. plans to gradually commission 10 fast charging points in phase one. The infrastructure is being created also thanks to a European grant from the Connecting Europe Facility (CEF) Programme. The first charging point at a Shell service station was put into operation at the Gočár Ring Road in Hradec Králové.

50W fast charging stations make it possible to recharge most of an electric car’s battery capacity within 25 minutes.  The first ČEZ charging station at a Shell service station is already in service at the Gočár Ring Road in Hradec Králové.

“Both ČEZ and Shell are companies that intensely work on transforming the present energy sector into a clean and sustainable one. Electro-mobility is an important component of that, and its growth goes hand-in-hand with the gradual phase-out of coal and an increase in the share of generation from zero-emission sources. Over time, we will build charging stations at the first ten Shell service stations. A clear condition for the development of inter-city electro-mobility is a network of fast charging stations on major roads. The European grant from the CEF programme for the Transport sector is helping us to significantly accelerate that development,” said Pavel Cyrani, Vice Chairman of the Management Board and Head of the Sales and Strategy Division at ČEZ.

“Partner solutions for electric car charging are one of the routes via which Shell strives to deliver new forms of energy globally. Our ambition for the future is to offer fast charging on long-haul as well as short trips, to those customers who choose to drive electric or plug-in hybrid cars,” said Jan Čapský, Head of Shell service station operations in the Czech Republic and Slovakia.

In two phases of the ČEZ project – “EV Fast Charging Backbone Network Central Europe” – more than 100 fast charging stations will be set up by 2020.  Thus far, nearly 70 stations have been installed in the two projects.  Beyond the scope of those locales, ČEZ has been building stations using its own funds and funds from the Transport Operational Programme.  Currently, ČEZ operates the most extensive network of public charging stations for electric cars in the Czech Republic, featuring more than 200 stands, of which nearly 150 are fast charging stations.  For more, see http://www.elektromobilita.cz/cs/mapa-dobijecich-stanic.html.  The network is used both by regular customers as well as single-use clients.  The recently introduced new system of customer service allows, for example, for automatic searches for the nearest charging station, including indication of charging cable occupancy, communication with the user about the car charge level, for example, via text messages or charge volume and price statistics.

ČEZ fits all new locales with ABB fast charging stations whose standard features include, in particular, DC connectors with the CHAdeMO and CCS charging standards that allow for charging at up to 50 kW.  Stations are linked to a cloud-based platform that makes it possible to monitor a facility in real time and to provide remote diagnostics.

There are currently more than 4,000 purely electric cars registered in the Czech Republic.  In 2017, 400 new electric drive cars were registered, a year later 725; last year, it was 789 electric cars and in the first five months of this year alone, a total of 1,171 e-cars.  Estimates of further developments speak of thousands of electric automobiles and plug-in hybrids within a few years.

ČEZ Group has been active in the development of electric mobility since 2009.  The primary activity since the very beginning was to build and operate public charging stations.  Today, the focus is far broader, including serving customers from the retail segment (ČEZ Sales) as well as service for clients in the corporate, municipal, and regional sector (ČEZ ESCO).  ČEZ is, for example, responsible for designing and installing turn-key charging stations, for the electrification of car fleets, charging platforms, including IT solutions, lease or sale of electric cars and wall-boxes and cables for recharging.  To local governments, ČEZ offers implementation and operation of charging stations for electric buses and design of a concept of electromobility for individual towns and regions.  For more, see http://www.elektromobilita.cz/cs/mapa-dobijecich-stanic.html.

Royal Dutch Shell plc is incorporated in England and Wales, has its headquarters in The Hague and is listed on the London, Amsterdam, and New York stock exchanges.  Shell companies have operations in more than 70 countries and territories with businesses including oil and gas exploration and production; production and marketing of liquefied natural gas and gas to liquids; manufacturing, marketing and shipping of oil products and chemicals and renewable energy projects. For further information, visit www.shell.com 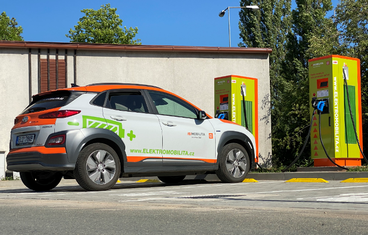 Unipetrol and ČEZ have further expanded the offer of the Benzina network with electricity. Benzina now offers fifteen fast-charging stations at twelve locations – newly in Břeclav, Domažlice, Hlinsko and Siřejovice.