The money will be used to affirm Vulog’s position as a leading provider of technologies in the sphere of clean shared mobility and for further expansion in Europe and both North and South America. The Inven Capital fund acquired a minority stake in the French company in 2017, when it and other investors provided 20 million dollars to Vulog. Shared mobility driven by Vulog’s technology operates in more than 30 cities on five continents. Thanks to the 95% electrification of the contracted fleets, 200,000 tonnes of CO2 from transport is saved every year.

Vulog gained 31 million dollars from the European Investment Bank (EIB) and its existing investors, including Inven Capital.  The company will use the sum to launch new projects throughout the world – in the first three months of the year alone, it is planning eight projects, with the first being in New York.  A service driven by Vulog technology is used somewhere in the world every two seconds.

Vulog is not Inven Capital’s first investment whose success has attracted finance from other interested parties.  A similar scenario took place with the Israeli company Driivz, whose IT platform for charging station administration and operation is used by 300,000 electric car drivers globally, including Czech ones.  Last year, approximately a year after the entry of Inven Capital, Driivz obtained an additional 11 million dollars for development.  New financing from globally renowned companies was attracted by other Inven Capital investments, as well: the manufacturer of smart thermostats tado°, for example, attracted investors from Amazon; the developer of high-temperature electrolysis Sunfire attracted investors from the refinery giant Neste.  Inven Capital also successfully sold off its interest in cleach-tech companies.  The producer of batteries sonnen was purchased by Shell, and the Israeli start-up company CyberX, focused on cybernetic protection, was taken over by Microsoft last year.

“This new EIB support confirms its confidence in Vulog in the transformation of global mobility.  Our mission is clear: to reduce the number of individually owned cars in cities.  In order to achieve this, we deliver technical solutions that are green, comfortable, and economical for individuals as well as organisations.  We also provide a robust set of operating instruments, most of which are either controlled by artificial intelligence or rely on intelligent work procedures.  Thanks to that, consumer-oriented companies can offer optimised and profitable operation,” said Vulog’s CEO, Gregory Ducongé.

“Fleet owners and operators must digitise their services to satisfy the changing needs of their customers.  Vulog’s technology is at the forefront of the revolution, and mobility operators take advantage of their powerful scalable platform and the expertise of the team.  We are excited about what the future holds for Vulog, because they are perfectly positioned in this global and prosperous market,” said Ivo Němejc, Investment Director and Vice Chairman of the Management Board of Inven Capital.

Expert estimates say that within five years, the global shared mobility market will reach the value of over 9 billion dollars.  Vulog is a leading global platform for shared mobility.  Its technologies are used, for example, by large corporate players in the automotive (PSA, Volkswagen, Renault), insurance (Canadian BCAA), and energy (Repsol, MOL) sectors. Aside from cars, sharing includes other types of vehicles: scooters, bicycles, mopeds, and vans.  Inven Capital entered Vulog in 2017, and two years later, it strengthened the sphere of clean mobility by an investment into the Israeli company Driivz.  Through Sunfire, the ČEZ Group venture capital fund also takes part in the construction of a gigantic green aircraft fuel production plant. 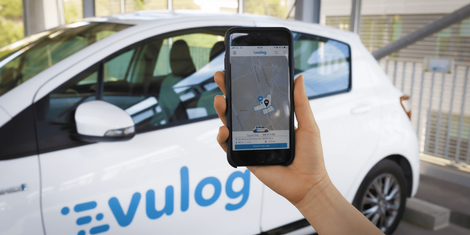 2020 IN ELECTROMOBILITY: ELECTRIC CARS DREW A QUARTER MORE ENERGY AT ČEZ. CHARGING BEGAN TO BE CONTROLLED BY SOFTWARE FROM THE ISRAELI COMPANY DRIIVZ