Back
CEZ Group Media Press releases Temelín's Unit 1 restored the production of electricity. The outage has taken place in the mode of full testing of both plant and suppliers’ staff

At the weekend, Unit 1 of Temelín NPP started to produce electricity again. Due to planned refueling, the operators shut Unit 1 down on March 26. The outage lasted for 56.5 days and took place in a strict covid regime. The technicians have daily tested on average five hundred workers during the outage. Together with the Dukovany power plant, all six nuclear units are currently in operation.

In the strict covid regime, the Unit 1 outage took place. In practice, this meant about five hundred tests per day on average, and a total of 20,000 tests in two months. The biggest strain was the first day after Easter when health workers came close to one thousand tests, namely 975.

"We have tested all workers once a week, key professions twice a week, and foreign workers for the first five days virtually every day. The tests have proved successful, we have maintained a favorable situation at the plant, and we will continue to do so,"

At Temelín, ČEZ has been testing workers since February. So far, they have carried out more than 29,000 tests here. In addition, other measures have also been in place, such as working from home, wearing face masks, measuring the temperature, or emphasizing disinfection. "At both power plants, we will be releasing the measures very carefully and following the actions of the state. In the first wave, we release the home office and wearing of the face masks in outdoor areas. Other measures will remain in force. We have two more difficult shutdowns waiting in Dukovany and one in Temelín, which is why we need to keep a favorable situation at both power stations," emphasized Bohdan Zronek, member of the ČEZ Board of Directors and Director of the Nuclear Energy Division.

During the outage, the technicians replaced 48 out of 163 fuel assemblies in the reactor. Important activities included the inspections of safety systems, the turbine or the replacement of two separators, devices in the non-nuclear part that remove moisture from the steam and subsequently heat it. From the new separators, ČEZ expects to increase the output by additional units of MWe with environmental benefits in the form of annual savings of one thousand tons of carbon dioxide emissions that would otherwise have been generated by coal-fired power plants. The exact power increment will come from the guarantee measurement that the technicians expect to carry out after several weeks of Unit 1 operation.

"We're doing all our steps so that we can run the plant for up to 60 years. Achieving this working age is not a matter of course and possible without continuous modernization,"

The technicians have performed almost 14,000 activities in the outage schedule, including 73 investment actions. In addition, up to five hundred new employees of supplier companies were resent at the power plant. Temelín's next scheduled outage of Unit 2 is expected from July 2. Yet before (on May 29), Unit 3 will be shut down at Dukovany. At present together with Dukovany, all six nuclear units are operating, which cover 40 percent of Czech electricity consumption without any emissions. 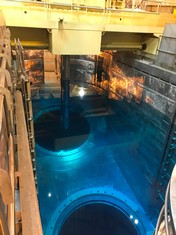 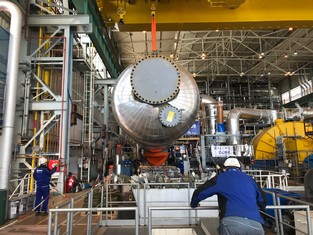 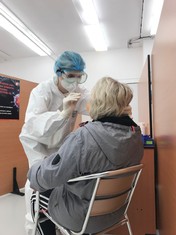